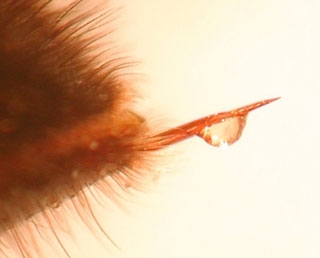 Bee venom is produced by poison glands in worker bees and stored in venom bags. Bees that have just emerged from the cell have very little ability to produce poison and reach their maximum production capacity when they are 12 days old and loose their ability to produce poison when they are 20 days old. However, this ability does not disappear in winter bees. A worker bee produces about 0.3 mg of poison during its lifetime. The bee leaves its needle on the stinged creature during the sting and then dies. In a sense, the worker bee is willing to die to protect himself and his colony.

Bee venom collecting, although there are different methods, more 5-paced parallel to the wires placed under the glass plate arrangement is used. When the 12 volt current is applied to this device, which is placed on the hive flight board or hive bottom board, the bee that touches the wires encounters a slight electric shock and leaves its poison on the glass plate. The bee does not die as the needle does not sink. The liquid bee venom crystallizes as soon as it is left on the glass plate and is then scraped off with a razor blade. 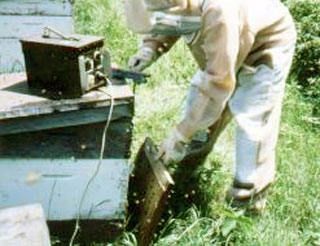 As the bees are highly disturbed during the collection of bee venom, safety measures should be taken in terms of living organisms and the application should last for a maximum of 5-10 minutes for 1 hive. Application When applied to 10 hives 1- It is possible to collect crystal poison.